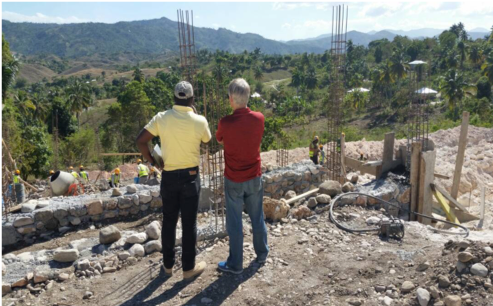 Ask most north Americans what they know about Haiti and they will tell you that it is a very poor country that appears to frequently make the news for its exposure to various natural and socio-political calamities.  A few of us have a vague notion that it has been politically and economically unstable since the 1970’s while under the leadership of a certain “Baby Doc”, president Duvalier from 1971-1986.  Some might recall that it was recently struck by hurricane Matthew in October of 2016.  Most will recall that it was rocked by a devastating earthquake in January of 2010.  Almost everyone has seen photos of agitated angry mobs of protestors or densely packed ramshackle housing clinging precariously to hillsides.

Hurricane Katrina (2005) had previously jolted US structural engineers (SE) into realizing that their deep understanding of structures and buildings made them critical participants in emergency response efforts.  All of a sudden, NCSEA’s SEER committee was on our lips.  Where do I sign up?  How can I help?  Although SEAU’s SEER committee never did get called to play a role in Katrina’s emergency response, its members remained active organizing rapid evaluation trainings and making its existence known to municipal leaders and first responders.

Haiti’s seismic catastrophe hit and the committee’s members were ready to help.  Unfortunately, just like Katrina, there was no invitation to come help, nor any funds to take us there had there been an invitation.  Notwithstanding, the 2010 EQ was a call to arms.  As an SE who has spent most of his career designing buildings in areas of high seismicity, and as a native French speaker, the call to arms was a personal one.  If I was going to help I would have to raise the money to go, which I did.

It started with a seven-day mission in July of 2010 to assist in the evaluation of heavily damaged schools near the epicenter.  This led to other missions and eventually to becoming so involved in the reconstruction effort that between June 2011 to July 2015 I was nearly living permanently in Haiti.  Since 2015 I have been able to progressively reduce my commitment to rebuilding Haiti, but not eliminate it.  The work is not done.

So, why would anyone choose to do this?  In my case, a better question is why would an SE choose to do this?  When asked this way, the answer becomes clearer: because Haiti is chronically underserved by appropriately educated and mentored SE’s.  Haiti’s problems are seemingly never ending.  It ranks 158 of 168 countries for corruption perception and 163 of 188 for human development.  It’s GDP is 141 of 194 economies.  It is overwhelming to think about everything that needs improvement.  But SEs know how to design safe buildings and this knowledge can be shared.

Engineering learning opportunities are weak in Haiti.  Haitian universities would not qualify for accreditation in North America.  There are no adequate labs, few qualified educators, no graduate programs, and certainly no research.  Civil engineers can specialize in structures, but they do not study seismicity and EQ design.  Once they graduate, they cannot join a professional association that upholds and enforces ethics and standards.  There is no professional licensing.  If that was not enough, design consulting is practically nonexistent, leaving graduated engineers with one main avenue for employment – construction firms, as job superintendents.

It seemed natural to me that the best way to pass along my skills would be to mentor young graduates, just like I was mentored as a young engineer working alongside my peers, broadening my skills, and by furthering my education.

My commitment to Haiti has primarily been about teaching and showing Haitian engineers how to design EQ safe buildings.  I was able to accomplish this by founding a Haitian structural engineering consulting firm, (only the second in the country, then, and now), hiring young engineers and drafters, securing projects, and designing buildings with them.  The company opened its doors in July of 2012.  In September of 2016 I gave the company to its employees and now act primarily as a technical and business coach.  The company, Genie Structures d’Ayiti (GSA), now employs six engineers and one drafter.

In hindsight, the learning curve was just as steep for me as it was for anyone who worked under my wing.  Sure, working in French and Creole was different, and adapting to a different culture was an unending effort, but fully grasping the complexities of Haiti’s complex and inefficient construction economy was mandatory.  Correctly designing a code compliant structure is one thing; ensuring that a compliant design is erected correctly in Haiti is an entirely different challenge and my skillset had to mold itself to the Haitian reality.

When a project is commissioned for design and implementation, the process goes

A slight and uncommon variation to the standard process is for an architect to be retained to prepare a design and a bill of quantities (BoQ).  The architect will prepare a rudimentary set of plans and may or may not employ a civil engineer to design the slabs/beams/columns/footings.  The contractor will prepare a price based almost exclusively on the BoQ and fill in the missing design elements.

Take a moment to wrap your mind around the multiple follies that this procedure includes.  Surprised?  Concerned?  Now, picture the typical construction firm as being run by an un-mentored civil engineer, employing 2 to 8 un-mentored engineers (mostly civil), and one or two masons.  Worried?  Astounded?

Let’s highlight some of the missing steps we are used to seeing and take for granted:

Before the earthquake, you could add to this list; A) no design basis, B) no code enforcement, and c) no city planning and zoning.  The devastation of the quake exposed the inadequacy and flaws of this system.  Haitian building infrastructure (commercial, institutional, public, industrial, residential, etc) was comprised predominantly of unapproved, ill conceived, un-engineered and atrociously constructed buildings, roads and utilities.  Following the quake, hundreds of organizations provided experienced design and engineering capacity to Haiti, which has left its mark.

The commissioning and design process have somewhat improved.  Haiti now has its own building code.  This document is a mashup of the Canadian Code, the IBC, and Eurocode.  It is basic and will not evolve, but it is better than nothing.  A small department in the government body that oversees public works has been created and mandated to review the technical merits of public buildings.  This department is understaffed (2 engineers – for the entire county) by poorly qualified and hastily trained but well-meaning individuals.  Also, not optimal, but better than nothing.  Geotechnical surveys have increased in their breadth and value.  Concrete design is taken more seriously, and the percentage of steel and confinement has gone from completely inadequate to oftentimes overkill, especially since analysis and detailing is still largely guesswork.

Other improvements include the introduction of structural steel.  This is usually designed and fabricated outside of Haiti, but some compliant steel structures have been designed by GSA and Miyamoto.  Light gage steel is now present in Haiti and used as the primary structural system for structures in most sectors.  National schools are now built according to standardized and modularized plans that were developed by Swiss engineers in collaboration with local agencies and engineers.  Funders such as the World Bank and the InterAmerican Development Bank are now keenly aware that new infrastructure must be designed according to the process we are familiar with in North America.

Haiti remains a frustratingly difficult place to work and to practice the profession of structural engineering.  There is still so much left to do.  However, a lot has been accomplished and the foundation has been laid for more positive changes.

Dany is president and founder of Canyons Structural, Inc, in Salt Lake City, UT.  He has been practicing structural engineering since 1991 and is licensed in the US and Canada.  Since getting involved with Haiti’s reconstruction efforts in 2010, Dany has participated in hundreds of design projects, including 300+ schools.